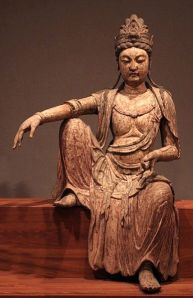 Guanyin is the bhodisattva of compassion.  I love this image for may reasons.  The first is its  grace and beauty.  The ease of the figure is a kind of invitation.  Early forms of the figure are thought to be male, or androgynous. Nevertheless Guanyin is, in this millennium, feminine.  There are many legends about Guanyin (also popularly spelled Kwan Yin), showcasing her generosity and deep desire to help others out of their suffering.

Taking some dharma teaching to heart this past year, I read a bit of buddhist theory and notes on practice and mind training.  I particularly took an interest early on in a book about healing anger through the buddhist practice of patience (written by the Dalai Lama).  This because I’ve rightly been accused of being an angry, or at least often annoyed, woman.  I thought I’d better give equanimity a shot if I wanted to have any friends.

Also, though, as if that weren’t enough, I’ve done this out of an interest in cultivating a calmer, clearer state of mind.  It dawned on me in a moment of profound reflection that nothing I could do to alter my situation would change my emotional state.  I had to do that from the inside out.  So I set off in earnest with morning prayers that started out like this:

Please let me have clarity and happiness today.  I take refuge in the buddha, the dharma (teachings) and the community of buddhist monks until I achieve a state of enlightenment.

I know that is absolutely hysterical – all the more if you know me and my general state of grumpiness.  But there you are.

I found it surprisingly effective.  I actually felt compassion for people I do not like because they are antagonistic to others.  I didn’t like them any better, but I felt compassion for their meanness, realizing it couldn’t be any fun to be so mean, and I felt surprisingly liberated from my negative feelings about them.  In fact, I got hooked on buddhism because the days I started with these reflections turned out to be so much more pleasant than the days I didn’t.

I’ve studied buddhism in the past and always admired its good sense.  But this is something else – a connection with it – that I hadn’t felt before.  I think this has arisen out of a kind of readiness to release some notion I had of cultivating control in my life.  Somewhere along the line I worked out I could only have that as an internal state and not an external one.  And I started working on accepting that.  I am still working on accepting that.  And so having put one foot on the path I’ll say good night so that I can meditate. Who knows?  Maybe I’ll see Guanyin in my dreams.